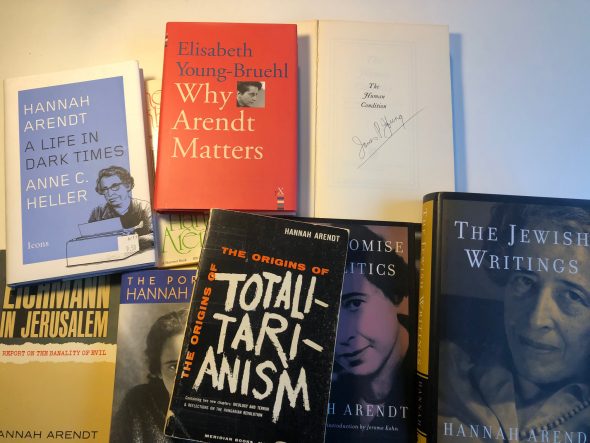 Early on in this pandemic/quarantine I wrote about the need to make connections with old friends, colleagues and mentors. The immediate occasion for that advice was a trade magazine for which I write a monthly column; but like everything else I publish there it’s less about the immediate work environment and more about life in general.

I’ve tried to use my time of late in a similar way, though it has not always panned out as carefully as I had advised. Rather, it’s more like I looked up around me and saw that connections had been forming all along and that I was now happily and wisely ensconced in them.

That realization came over the weekend, as I was slowly trudging through a pretty complicated book called “The Human Condition” by one of my favorite political philosophers, Hannah Arendt (1906-1975). It’s the kind of reading I’ve been doing lately to try to make sense of what’s been going on nationally. Not that Arendt was writing about a plague. She was, however, always writing about the capacity to be generous and creative in public, often in miserable moments of history – whether under Nazism, during the Holocaust, or amidst violent public protest.

The copy I held in my hands was a paperback of her 1958 book. It bore a signature opposite the inside cover from a reader by the name of “James P. Young.” And that’s when I realized the amazing connections that brought me to that moment where I was reading – actually re-reading – that particular volume. Because James P. Young was the first university instructor I had in political theory – a course I took in the spring of 1974 at SUNY-Binghamton, now called Binghamton University.

Back then, my course in American Political Thought included reading the U.S. Constitution, the Federalist Papers, sections of Alexis DeTocqueville’s “Democracy in America” and a reader on “Consensus and Conflict” that Prof. Young himself had edited. It was the first of many such classes I would take, initially as an undergraduate, then later in my doctoral studies in political theory and international relations at the University of Massachusetts.

Prof. Young’s class really inspired me. It also introduced me to Arendt’s work on the American Revolution – to the point where I spent the summer of 1974 reading everything I could find by Arendt, which turned out to be a lot. That whole summer I did two things: drove a taxi in NYC and holed up in the makeshift bedroom my father had built in the basement, where I devoured Arendt’s major works.

Years later, after I left academia and had established myself in the golf world as a writer and critic, I got an email out of nowhere from a Scott Nelson. He had been reading my academic work that I had previously written; he also was a golf course architecture enthusiast who had been reading my more current work. He had a simple question for me. “Are the two of you the same person?”

That started a friendship that has transcended both golf and academia. We had the same interests, the same enthusiasm and an incredible number of scholars in common with whom we had studied, written and been inspired.

Among them was Prof. Young. Scott by then was an assistant professor at Virginia Tech, where one of his senior colleagues had been my mentor as an undergraduate. When he wasn’t teaching at the university in Blacksburg, Virginia, Scott was living with his wife in Ann Arbor, Michigan. When Scott’s senior colleague found out about the Ann Arbor connection, he suggested that Scott contact a retired professor of political theory there with whom he might have much to discuss. That retired professor was James P. Young.

Scott and Young hit it off, beginning a series of meetings over lunch where they discussed readings in common. Prof. Young, who suffered from crippling rheumatoid arthritis his whole life, was also enthusiastic about the meetings. My name came up among many of his former students who had gone on to academic careers.

As Young’s condition worsened and he found himself confined to his home, Scott would visit there for their occasional political theory discussions. When Prof. Young died in 2013, Scott was given the responsibility of divvying up part of his impressive library. You can imagine the feelings that overcame me when Scott sent me the nine volumes of Prof. Young’s Arendt collection. This is how I came this past week to hold in my hands that copy of “The Human Condition.”

It gets better. Scott and I have played a lot of golf together and talked a lot about politics and where the country is going. We’ve talked for a long time about collaborating on a writing project. This past December we sat at the bedside of yet another one of our shared distinguished senior colleagues, someone who was in rapidly declining health. The three of us talked, with Scott and I doing the bulk of the conversing and our (former) professor clinging to the thread of the talk, simply urging us on.

Which is when we decided to honor our common friends and write that book. We are now well underway in an effort to make those connections more substantial than ever. The book is about citizenship and responsibility in the pandemic age. We’re calling it “Unmasking Democracy.” It’s a project that draws upon many threads. Turns out those connections have lasting value.

This article has 1 comments