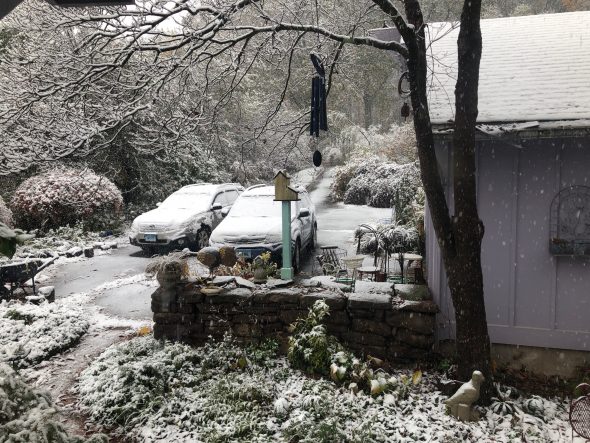 A strange year is about to get stranger. Winter is already setting in upon us, and with it news that the Second Wave of the COVID-19 pandemic is going to be more pervasive than the first. Daily infection numbers are over 160,000 nationwide, with positivity rates on testing well over 3-4 percent.
The most dangerous place in the world to be if you are worried about the virus is North Dakota. Hospitals are full, and the Republican Governor, who had refused to invoke a mask-wearing mandate in the name of freedom of choice, has decreed that doctor and nurses registering as positive for the virus can still work in health care tending to infected patients.

For too many Americans there is still an air of disbelief, as if the pandemic were a hoax, or exaggerated, or simply the way another way of everyday life making things tough for some people and not so tough for others. In which case, fatalism suggests that no measures of prevention or caution are needed. So let’s all just continue with plans for large family gatherings at Thanksgivings.

One of the saddest expressions of this is now circulating its way through the internet in the form of a four-minute video conveying the experiences of an ER nurse in a small town in South Dakota as she deals with dying COVID patients. (https://www.cnn.com/videos/us/2020/11/16/south-dakota-nurse-intv-newday-vpx.cnn)  It took courage for Jodi Doering to tape this interview. Let’s hope her hospital doesn’t censure her for doing it. More important, let’s hope her sadness and realism have an impact.

South Dakota is one of those places where the Republican governor extolls the virtues of freedom and still will have nothing to do with regulations requiring mask wearing or respect for social distancing. It’s also the state where nearly half a million motorcyclists gathered north of Rapid City in August for the annual Sturgis Motorcycle Rally to produce a super-spreader event that has ravaged the state ever since.

South Dakota, with 885,000 residents, has now lost more people to the virus than has the entire country of South Korea, population 51 million.

The notion that facing up to facts will convince people to change their behavior is based on a long-disproved understanding of how perception and learning work. We perceive the world and all of its discrete facts within a framework or ideology. Think of it as tinted lenses. Or as a built-in confirmation bias that tilts towards some interpretations and avoids others. To some extent, we all interpret the significance of things differently. Just look at how folks evaluate the benefit/cost ratio of gathering for the holidays or getting together at a party.

But there’s a world of difference between evaluating risk and reward differently and repudiating basic facts of science. And that’s where we are on very dangerous ground these days with the pandemic and the public policy response to it. There are, as everyone knows, parts of the country where most people abide by guidelines for wearing masks and keeping social distance. And there are other areas of the country where government officials don’t even pretend to have standards, either because they don’t themselves believe in the science or because they are worried about enforcing the rules among people not likely to comply.

The good news lately is the considerable progress made in development of an effective vaccine. Both Pfizer and Moderna report promising early results in second-stage, large scale trials, with indications of 95 percent effectiveness against the virus. There’s a lot to be worked out before they go to the Food and Drug Administration for fast-track authorization. Beyond that remain considerable infrastructure issues of production and distribution to be worked out.

It would help a lot if the outgoing Trump Administration would coordinate with the incoming Biden Administration on how to handle those issues. This is one of many areas in which Trump’s petulant refusal to acknowledge his electoral loss could have deadly consequences for the American public. With infection rates now approaching 200,000 a day and with a quarter of a million people already dead, and delay resulting from a botched handoff of power could prove fatal to vulnerable Americans.

There’s also the issue of undue optimism about how a successful vaccine would work. Early polling suggests that only half of Americans would take it – a number that is likely to increase, assuming proven success of the vaccine. But given the rabid anti-science, anti-vax culture in this country it is unimaginable that more than two-thirds of the population will ever agree to get the vaccine. That leaves a lot of unprotected folks out there.

The irony of all anti-vax positions is that their safety is, paradoxically, largely parasitic upon the compliance of the rest of the population. For that to work with COVID-19 we are going to need continued reliance upon some measures of masking, social distance and caution for some time to come.
The problem is we’ll be asking compliance and restraint of a people who, by their reluctance to take the vaccine, will have already demonstrated skepticism towards the entire anti-virus campaign. A vaccine will help those most vulnerable to the virus, and that alone is reason to be hopeful. But in a curious and unsettling way, there’s also reason to think that without a willingness to commit to the safety of others, the virus will be part of our lives for a very long time.

At this point, the issue of public health has to confront the inadequacy of a peculiarly individualist approach to well-being. So much of the American debate is based upon narrow self-interest, as if the only relevant consideration is how one can protect oneself. The failure of masking and social distancing is not in the practice itself but in the notion that what’s relevant is how helpful or inconvenient those measures are to one’s immediate physical freedom.

The examples of places with extremely low infection rates – Nova Scotia, New Zealand and South Korea come immediately to mind – is that public health is about other-regarding behavior in a public setting. That means community health and a sense of our relationship with others: not just friends and family, but other citizens and persons generally. That requires not just a vaccine, but a re-thinking of our engagement with those with whom we share the world.