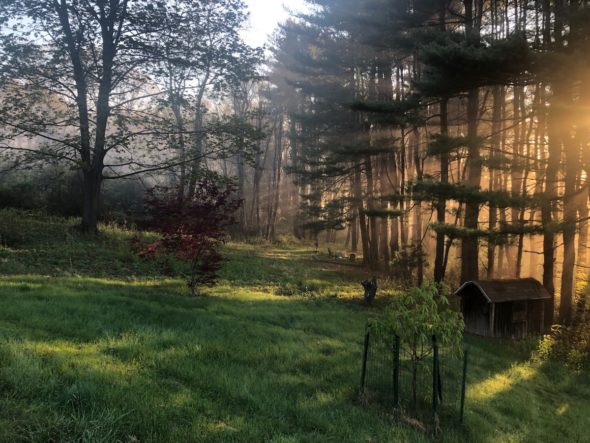 Nothing is the same, anymore.

Well, not “nothing.” But so much is different, new, unaccustomed. Have seen the grandkids a lot but have not hugged them in months.  My hair is too long and there’s nothing I can do about it. The standard rule about clothing, that you wear 20 percent of your wardrobe 80 percent of the time, doesn’t come close. More like 10/90. Or worse. And nobody seems to mind.

We used to have a bird feeder up in the back but this year I moved it in closer to the kitchen so we can watch it from there or the dining room where I’m starting to work a lot. The feeder occupies a perfect viewing area, but because the canister hangs from a little bracket I have to take it in each evening and put it out each morning. Otherwise it will get taken down by the bear – yes, there is a real “bear” in the near woods who visits us occasionally.

With the diversity of the bird feed we provide – sunflower seeds, safflower seeds, millet, plus cracked corn scattered on the ground – we have an amazing proliferation of birds coming to feed and thus an endless clattering of avian life to behold. I’m no birder; it’s just something I appreciate. My wife is more conversant with the different species out there and has helped me identify them. The last few weeks we’ve noticed an amazing array: gold finches, cardinals, woodpeckers tufted titmice, mourning doves, cardinals, house finches and blue jays. For the time in the 18 years we’ve been here we spotted male rose-breasted grosbeaks. Quite distinctive, they are, with their red scarves.

A month ago a plump ring-necked pheasant took up residence around our yard. We named him “Phreddy.” He’s obviously looking out for a mate and likes to perch atop a little stone parapet by the front door that affords him something of a lookout to the east. Normally, the skies in that direction would be taken up with airplanes departing from and arriving into a major airport only eight miles away. But these days the runways are quiet and with that newfound solace, bird life seems to flourish.

Solitude takes on an eerie feel. That was the case a few mornings ago, when the early light coincided with a fog bank dissipating and creating a kind of astral trail of light through the pine trees. There was just enough moisture in the air to refract the sunlight into a muted sparkling. I’m not sure my camera caught the mood; nor that my words properly convey the feeling of early softness in the air. But it seemed like one of those moments when everything stops for a few seconds and you feel lucky to be alert to the world.

Last night there was another such moment; this one the strangest light of all. It was early evening, an hour before sunset, and all of a sudden the day-long cloud cover started to ease up and the eastern sky lit up to the descending sunlight. The air went clear and golden yellow, and my first thought was of a reverse sunset. Why shouldn’t the world just run in reverse; everything else was topsy-turvy. It felt like anything is now possible. For some reason it made me think of the scene from “Close Encounters of the Third Kind” as they meet up with the space ship.

I ran to get my iPhone camera, and as I got outside it started to flurry intense with snow. Now I was inside one of those hand-held snow globes and some bigger force than merely human had shaken up the world. The snow passed quickly. It took longer for the eastern light to douse. Strange light and strange sights, I thought. Somehow they seem to fit these times.