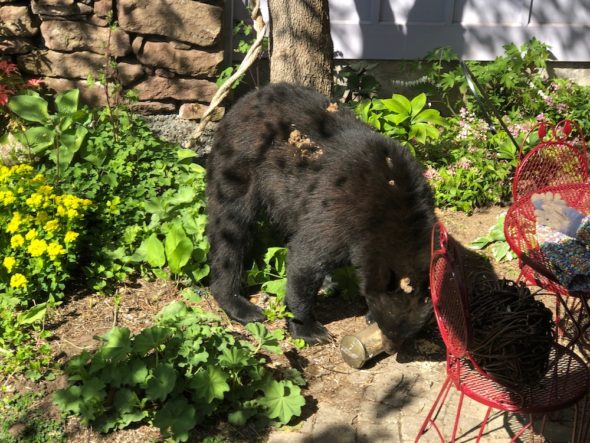 A neighbor stopped by and made an unexpected house call. Didn’t knock. Wasn’t wearing a mask. Just to let us know he was doing okay and helping himself to some of our food.

Actually, it was the bird food he helped himself to. And while he wasn’t wearing any PPE he certainly did have a lot of protective fur, so we figured he was safe from whatever he needs to be safe from. The fact that it was 9:30 in the morning and he didn’t even feel the need to sleuth by night told us a lot about how secure he felt

Black bears are amazing creatures, both for their mass and their ability to slip furtively in and out of modestly settled areas and disappear into the adjoining woods. We live in the forested outer edge of suburbia, where wooded home lots border state forest and park lands. The bear population of Connecticut is estimated by naturalists at 800, which makes for just over six square miles per bear. Given the state’s high population density – ranked fourth in the country, exceeded only by New Jersey, Rhode Island and Massachusetts – it’s no surprise these creatures “congregate” (if that’s the words) in the less populated northern half of the state. Which brings them near us.

We’re careful about them, putting the bird feeder out only during the day and taking it in at night. We’ve also learned to keep our garbage pail in the garage to avoid attracting the bear. And if I have to go out at night I’ll first turn on an outdoor light or just give a shout out to scare off the bears. I’ve learned they are more scared of us then we are of them. How adaptive are bears? I can’t tell if there’s one or more, but they seem to know their rounds and that curbside pick-up is Monday at 7 AM. If we put our pail out Sunday night there’s a decent chance (say 1 in 5) that its contents will be scattered about in the morning before the garbage truck arrives. I am now used to waiting until 6:45 AM before putting the pail out.

Bears are amazing to watch, which we get to do the dozen or so times a year we spot one around the yard. The cats go crazy, but I just go for my iPhone camera and try to get some pictures. Often I’ll spot one of them as I come back home and drive down the driveway – at which point they’ll just disappear behind some shrubs and tumble down a hill to a neighboring yard. Two or three times now as I’ve come down the driveway the bear has ducked into the garage, presumably in search of the bird feed we keep there. If I have forgotten to hide the feed in sealed metal cans and shut the garage door the bear will find the food.

We co-exist with other wildlife, both inside and out. I always get a kick when folks we talk to in more settled areas describe their joy at seeing a deer. It’s a reminder of the ability of the animal world to adjust, uneasily or not. Deer here are common; to the point of overabundance that we worry they are competing for scarce resources and probably need to be culled.

As for other frequently spotted wildlife in our little backyard world, we have logged rabbits, owls, raccoons, skunks, opossums, chipmunks, squirrels, snakes, coyotes, foxes, frogs, bobcats  and numerous other species of birds, butterflies and bees.  My favorite is watching the wild turkeys – in part because it always reminds me that a grouping of them is called, appropriately enough, a Congress.

Nor is our house immune to these creatures. Thus far we have found within our walls mice, frogs, a bat, a blue spotted salamander, countless species of insects, spiders and bugs, a foot-long garter snake and, on one particularly messy occasion, a raccoon that had to be tasered by the police at 4 AM and safely removed.

If animals of that size can co-exist, hide, live their lives and manage to adapt it should not come as a surprise that even smaller creatures can find their way into our world. It’s understandable if misguided when people feel that the threat posed by invisibly small creatures has been overstated; critters so small they can be carried along on the aerosolized spray of sneezes, coughs or fricative consonants. I chalk this up to not understanding the genius and adaptability of nature. It’s also a by-product of a very modern, mechanical approach to economics, industry and ecology that mistakenly thinks it can dominate and rule the world and eliminate all uncertainty and risk.

Maybe we’re paying the price for this arrogance.  I think we need to be humbler and more respectful of the relentless power of nature to adapt, diversify and create difference species at every level.

Those who don’t appreciate that probably get very impatient at being advised to exercise considerable caution these days. A venture into any yard with open eyes and ears will remind anyone of the beauty and complexity of nature.

Bear with me. The evidence is overwhelming.