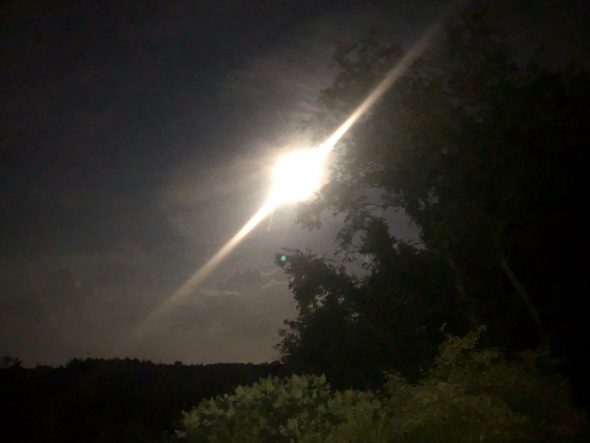 No society can exist without a sense of where it’s going. Not that everyone has to be on board with the same vision. But human beings need a sense of doing things for a reason. Without it we’re in a big stall.

That’s how it feels right now. The immediate future is very unclear because of the adaptive nature of the coronavirus. It travels invisibly and silently through the air. To a lesser extent it adheres to surfaces and gets passed on through a touchpoint that goes unwashed. A refusal by a certain percentage of the populace to wear masks that would reduce the likelihood of passing it on is, in effect, a collective declaration of mass stupidity and willful ignorance of basic science. The result is that we are no closer now to resolving the pandemic than we were three months ago.

Back then it seemed like there was a purpose to the quarantining and the self-imposed isolation:  to flatten the curve, develop herd immunity and make it more likely that we could return to normal.

Good luck with that. Turns out we don’t even know if this virus respects herd immunity. There is no conclusive evidence that prior exposure or even a symptomatic response to the virus creates the kind of immunity moving forward that we see with so many other infectious diseases.

Motivationally, human beings are a goal-oriented species. We act with some intended object in mind: an ideal that we can formulate as a concept through the gift of language. Maybe other animals speak, too, and have as developed a capacity for language as we have. If so, we don’t know it to the point where we can verify it. But humans spend a lot of time communicating their ideas – their hopes, fears, ambitions, desires, loves and goals in life. We talk about them. Dream about them. Write about them. Thrill when watching others express themselves in the arts.

In the process we learn, adapt and grow. That’s the difference between behavior and action. In behavior, there is recurring motion, a pattern: no learning or adjusting. Planets behave. They rotate and orbit with predictable regularity. Humans act; they lean, adjust, back off and reformulate.

To do that we need to have a vision of where we are going. National myths are one device for mobilizing people en masse. The myth of American Exceptionalism – as if we are a unique country not subject to the same material and demographic limits of other countries. Or the idea of the American Dream: each generation improving its lot, advancing its standing and self-esteem and being recognized through both formal rights (voting, equal protection under the law) as well as income growth. Some ideals can be powerful, even if they are in some ways not entirely true or fully realized. Or in some cases, even if they are a cover for underlying inequalities that persist.

Right now it’s hard to know what to believe or hold onto to as a public value. For example, how do you plan a career and think about your goals five and ten years out when it is so uncertain what that future might look like given the way basic professions have been shaken to the core of their operation?

It’s not at all clear that something as basic as classroom education can proceed in the fall. Athletes planning to maintain their training regimens for another season of competition face the likelihood that efforts to create a sanitized sports bubble for their games will fail short and we’ll see no collegiate or professional football, basketball, baseball and hockey at least until 2021. Foodies who cultivated their interest for years to the point where they could open their own boutique restaurants are staring at empty dining tables and unpaid bills. Something as basic as shopping has been completely upended.

The expedited efforts to ‘open up” the economy were driven by those who refused to see the unique way in which science and biological data cannot be wished away, ideologically.

The casual way in which public safety has been abandoned has given rise to a widespread ennui if not a more deeply rooted anxiety. The unmooring of security is evident in the way issues of racism and police violence have now infiltrated mainstream decorum and become a widespread protest movement that cuts to every corner of American life. Even the business world has become worried – which takes considerable doing. While I would not compare the motives to do away with a racist name for pancake syrup as equivalent in value to the motives of facing up to police violence, there’s no doubting the two are related like never before.

In the face of the resulting public frustrations we normally look to our political leaders for guidance, wisdom and vision. No need to detail what’s going on there. We are not going to find it where we need it most. In fact, what we find there is the opposite of reassurance; we are swept up there in a dark, malevolent invocation of the worst, most divisive kind of hatred.

Interestingly, that no longer works as effectively as it used to. Sure, there is a certain percentage of the American public that takes solace in their anger and resentment. But that’s not enough to build anything creative. It is a purely destructive force, which is why it has attracted a label from its days as a symbol for the bundled axe wielded by Roman magistrates – a “fasces.” Those who cling to its violent power are fascists.

You cannot force humans to act creatively. They have to do it through their own will. It helps if they have a larger goal than their own existence to strive for. Right now, with survival on the line and a longer future hard to envision, that goal seems to be focused on getting to Nov. 3.