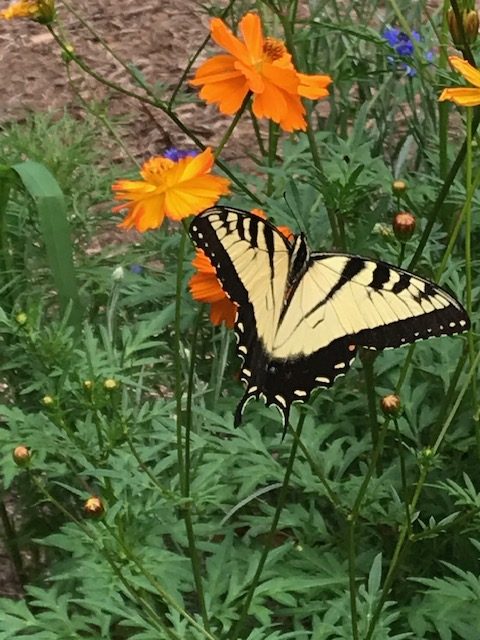 For some reason, the form I had to fill out at the eye doctor’s office  – where I was way overdue for my check up – asked, among other things, about “hobbies.” Maybe they needed to know if I were into coal mining, glass blowing or needlepoint. In any case, after writing ‘golf” and “reading” I hesitated and then went ahead and wrote down “gardening.”

Big step. I could hear the major chord play in my head and how it probably reverberated at the same moment in my wife’s. For years my experience with gardening was defined by the hard physical work of hauling, cutting, digging, while she was the serious tender of plants, with a “Master Gardener” designation from the University of Connecticut to prove it. I liked to revert to blatant gender bifurcation when I would describe our respective roles: I destroyed things; she cultivated them

With the pandemic, however, came lots of free time. And that meant more time in the yard. Having already taken down enough trees over the last 15 years to have created open space, a walking trail and yet more garden “rooms,” I was done with the heavy-handed work and now down to the hands and knees stuff, like planting, weeding, watering and watching things grow.

Little of our yard, both back and front, takes the form of lawn. None of it, actually, if by lawn is meant one of those green carpets of monoculture stand of turfgrass. Ours is entirely nature run rampant, and other than the occasional taming of the place with a mower we focus on the trees, perennial plans and small vegetable garden we can tease out of the ground.

I’ve always admired stands of wildflowers as an alternative to acres of lush green lawn. Which is why I decided as an experiment to try my hand at a small plot near – but not atop – the septic tank. So I hand cleared a 15’’ by 15” area of weeds, invasives and what have you, covered it for several months with cardboard from the packages that kept arriving – no Roundup for us – and when it was finally clear of surface growth plated it with six inches of top soil from the pile that had delivered to the driveway.

Having canceled our gym membership for reasons of safety, I needed some exercise to keep in shape. Or to get in better shape than ever, as it turns out. Hauling five cubic yards of topsoil around in bucket and wheelbarrow does wonders for you. For those not into landscape conversion data, that’s 11,000 pounds of dirt. Luckily, I stretched out the distribution over several weeks so as not to overtax myself.

Then I sprinkled a couple of random packets of wildflower seed into the soil, raked it over lightly, covered it with a bale of hay, and watered every day it didn’t rain for a month. And since it never rained that month I was out there a lot, accompanied, as it turned out, by my newfound backyard buddy, an itinerant pheasant that had escaped the local gun club and found safety in our midst. It probably helped that I fed him every day. By the end of the process I nearly had him – we call him Phreddie – eating out of my hand.

I was worried about the absence of growth but then some stuff started to appear, and after a while they little plot turned into a glorious profusion of untamed flowers – among them cosmos and African marigolds. It helped that bees and Swallowtail butterflies took up residence in the little plot, so it felt like I was not only promoting plant diversity but saving the world’s butterflies as well.

Of course I exaggerate. But such feelings of affirmation are all too rare these days, so permit me a bit of room as I gloat about this newfound success. And no sooner did this tiny plot prove fertile than I decided to expand it, with yet more cutting out of the ground growth and covering it with more cardboard as it arrives on a regular basis. It seems at least a better use of pandemic waste than tossing it in a landfill.

As for the backyard, that little plot and my regular encounters with Phreddie while watering have become part of a larger ritual that has made the yard come alive. Or at least I am now far more aware than ever of the synergies that animate our world.

It turns out, for example, we have a lot of bears in the area – understandably, since we live in a pretty wooded area across the way from state park ground and trails. The other day, during a searing heat wave, we actually had three of the bears sitting in our little backyard pond. But the best thing came when I opened up the garage door the next day to get some food out of the closed aluminum can in which we keep the food.

Phreddie promptly turned up at the bottom of the driveway, and at the top of the driveway came a local congress of turkeys – four adults, their six young ones – that also frequents our yard. We’ve taken down our bird feeders, keep the garbage in the garage and don’t leave anything for the bears to eat. But I will occasionally toss some food down for Phreddie, which I did this time, then headed up the slope to toss some more food for the path I knew the turkeys would be take. As I did so I heard some rustling behind me and realized I had left the garage door open momentarily.

That was enough for the bear to spring into action, pop out of the adjoining shrubbery and head right for the stored bird feed.

I realized then that the bear had been lurking, watching out for my feeding of Phreddie – as had the turkeys. Maybe, I thought, Phreddie was actually working for the bear as a kind of scout. Such are the potential machinations of nature when viewed through the kind of conspiratorial eye that has been honed of late on the news cycle.

Whatever the level of intent or strategy, the effect of the synergy was the same. A yard turned into a garden turned into a menagerie is now home to much activity. Which got me thinking about the start of a new joke: a bear, a pheasant and a turkey walk into a bar . . . .

This article has 6 comments