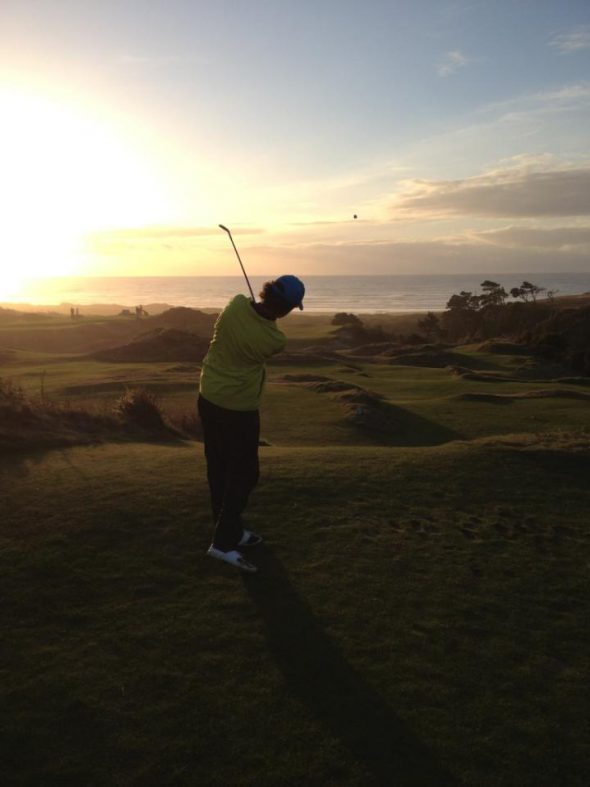 I’ve been playing golf now for over half a century – or trying to, anyway. It certainly feels like it’s been a long time, yet I still look forward to my next round. These days it’s easier to look back with clarity than to look ahead with confidence. But among the many things that keep me going until we finally pull out of this malaise of public health and political backsliding is a sense or hope of doing better.

Golf is a very misunderstood sport. It’s a lifetime game, played by people of amazingly different sizes, shapes, physical skill sets and emotional makeup. In that sense it is far more inclusive and inviting than basketball or football, less physically demanding than hockey, less capital intensive than boating or auto racing, and more mentally demanding than just about any other ball game.

It’s also played on the most beautiful, most natural landscape settings of any sport – on a field with the least specified regulations about the court. The only rule determining the size and shape of the field is that the hole cut in the ground to which one ultimately plays has to be four and one-quarter inches in diameter. That’s it. Everything else is up to the native setting – width, texture, elevation, distance.

Golf’s playing fields make the time spent out there worthy of the effort regardless of how well or badly you play. The game takes you to forested parkland, open meadows, the mountains, beaches, coastal bluffs and urban oases surrounded by commercial and real estate build out.

It’s also a public sport, though you would never know that by its reputation or by listening to the hushed, reverential tones of sacred privilege accompanying so much of televised golf. Yet here in the U.S., the game is overwhelmingly a matter of public access. Of the country’s 15,000 golf courses, fully 70 percent are open to anyone who walks up and pays a green fee. Three-quarters of all rounds are played on public-access courses, whether they are privately owned daily-fee tracts, resorts open to guests and day visitors, or municipal facilities with heavily discounted rates for local residents. Average green fee for a round of golf in this country is $40. That’s for four or five hours of engagement – far less than you’d pay to attend a baseball game, theater play or concert.

I fell in love with golf when I was 11 or 12 years old. To be precise, I fell in love with the trajectory of the golf ball. There was something about the arc, the flight over a vast, open field. I had bicycled over to a local country club, walked onto the course, stood there alongside a fairway and watched from afar as a player swung. I saw the glint of the shaft and then watched the ball launch skyward. By the time it butterflied down in front of me I had fallen totally in love.

For me the game was a way to escape a frenetic household. I’d go to driving ranges and beat golf balls. I’d go to my local city park with three golf balls and a lofted wedge and play makeshift holes for hours. I started caddying at a local private club the week I turned 14 and found it to be an ideal place for earning money and learning not to be afraid of rich people – who, I quickly found out, could be just as stupid as anyone. It helped that caddies were eligible to play the course on Mondays, so off I went on my bike, four miles with my clubs perched preciously on board, and then I’d come home that night and spend hours drawing the holes I had just played.

I also had access to New York City’s municipal courses, though that required two bus rides and a healthy hike at the end of the line. Whatever it took, I was out there, and I got just barely proficient enough to make my high school golf team – two years varsity as the No. 2 starter. All of a sudden, a scrawny insecure kid was turned into an athlete.

Fifty years later I’m still working on my game. I love the technical precision of the swing, the fact that you are trying to deliver an oddly shaped piece of metal at the end of a shaft and impart enough force swinging at (my swing speed of) 90 miles per hour to launch it 230 yards or so. I have no aspirations other than to keep working on my game and take great pleasure in knowing that no matter what little I might achieve the effort is a never-ending one.

I’m pretty inconsistent, as likely to shoot in the mid-90s as in the mid-80s. On a few occasions I’ve shot on the 70s, but I suspect those days are behind me. All I know is that for me golf has been a way to concentrate on disciplining my body and my mind, learning the limits of what I can do and yet working to stretch or nudge those limits marginally.

The physical part is important to me. It’s a way of fending off getting older and of still being able to do something I consider wondrous and beautiful with an economy of effort.

Ball games. They seem so simple. Maybe even adolescent. They’re not meant to be anything more than a test of one’s awareness of physical strengths, limits and discipline. In an era right now that seems so confined, there’s something liberating about being able to break those bounds, even if only for a few seconds.

For years I had dreams I could fly unaided and would wake up gingerly to see if my feet were still on the ground. Each time I try launching a golf ball, I find myself replaying that fantasy of flight.