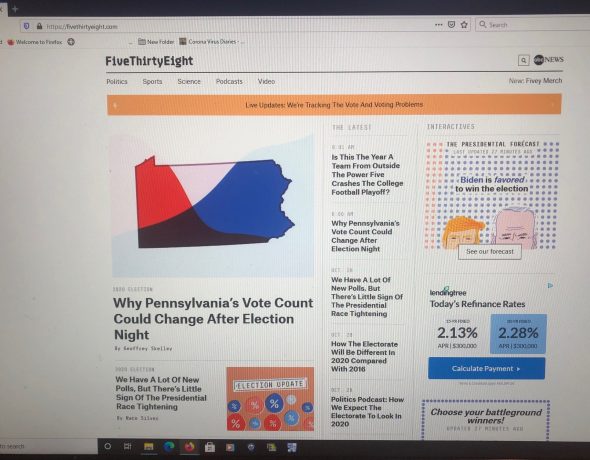 Most people I know are on edge, their mood swings dependent upon the last news clip they’ve seen, poll read or article depicting this or that nightmarish electoral outcome.

The onset of autumn hasn’t helped. Shortened daylight, cooler weather, less opportunity to engage in open skies and good long walks help expedite the early onset of SAD – seasonal affective disorder. Normally it makes its grip felt on the other side of the calendar: in the wintry doldrums of February’s cabin fever. But in this year of strange and unpredictable stressors it seems as if forced isolation and limited social engagement have exacted their toll earlier than ever. And one of the symptoms of this emotional lability is the oscillation between confidence and pessimism at the outcome of the Nov. 3 election.

There’s a medical model of neuro-psychiatry that chalks up mood swings to organic dysfunction. The diagnosis is based upon a biological-chemical model, akin to the now standard understanding of manic-depression. There are a lot of prescription drugs available for doctors to apply that will temper the mood swings and return the patient to a modicum of stability, or at least slow down the Jekyll and Hyde transformations.

There’s a library of books available that explore these issues. Far be it from me to venture a definitive analysis. But as someone whose equanimity has not exactly been one-dimensional and who has dealt with these issues on a variety of fronts, I can say with confidence that much of what I see these days in terms of electoral lability is a perfectly rational, reasoned and cogent response to the uncertainty we have all been thrust into.

We have been subject to psychological and physical abuse for four years now. The savage, willful neglect of the COVID-19 pandemic by the White House is only the most recent and most outrageous manifestation of this abuse. Women, immigrants, African-Americans and all people of color have been subject to a sustained campaign of dehumanization. The same maltreatment has been extended to whole categories of dependent, less privileged classes of people: the poor, disabled, those with pre-existing medical conditions, working class people, rural America and farmers and anyone who believes that healthy critical dissent is the lifeblood of a democracy.

The normal mechanisms for resolving these issues have been an orderly legislative process, an independent judiciary and the cycle of electoral accountability. But these, too, have been picked apart and systematically savaged to prop up a decaying corpse of lawless mobsters. The Attorney General’s office has been taken over by loyalists rather than legalists. The courts have not so much been “packed” as “rigged” with hastily nominated and approved judicial lap dogs. Trump has even managed to shrivel the U.S. Postal Service into a shell of its former self, unable to get mail from one side of town to the other in less than a week.

And now he’s going after the election process itself. The campaign against voting and counting has been going on ever since he squeezed through to win the Electoral College in 2016 while losing the popular vote. That grated on his fragile, narcissistic ego.

The attack upon voting and elections is not just due to his emotional instability. It’s also – mainly – the product of sustained internal analysis by Republican operatives that the only way for the GOP to remain competitive is to disenfranchise Americans, particularly those who pose a demographic challenge to the self-esteem and lingering hold of white America.

There’s a simple if very uncomfortable reason the GOP has put up with Trump and all of his torturous abuse these years. Their needs align. His peculiar insecurities about being liked and remaining in power provides a convenient foil for his and his family’s ability to pickpocket the American treasury.

Senate Majority Leader Mitch McConnell and Attorney General William Barr have figured this is small price to pay for being able to game the system in their party’s favor. They have fashioned a national strategy that extends into the State Houses run by Republican legislatures and governors. The goals are to limit voting and cast doubt on the integrity of elections and ballot counting.

The news is filled with “war game” scenarios of potential outcomes by which a proper electoral outcome is challenged, hijacked by the courts, or simply subject to violent intimidation by QAnon vigilantes.

In that turbulent context, word of a strong, steady lead in the polls by Joe Biden does not provide much lasting assurance. We all remember 2016. Small wonder that Nate Silver’s www.fivethirtyeight.com website is so much less fun to read and filled with more hedged analysis than when it first appeared back in 2008 as the bible for political junkies.

There’s no cure for electoral lability. But there are some things we all can do to gear up and develop some insulation as we prepare to ride out the coming storm. Disengaging from social media would be a first step. Twitter and Facebook, no matter how siloed and self-reinforcing our lists are, are subject to all sorts of wildly unreliable posts. Reducing TV news input will also help. Watching 24-hour coverage is like voluntarily submitting to hypnosis. A half hour here or there, sticking to a reliable, trustworthy show, should suffice. There is no need to feel like you need to know what “the other side” is saying, so spare yourself that agony.

It helps to have an action plan. That gives you some tangible sense of being prepared. Presumably you are voting – if not, shame on you. It’s not too late to donate to candidates. We did plenty of that with the money we decided not to spend on take-out meals. My wife wrote out hundreds of postcards to potential voters in Texas and Maine urging them to register and vote. This weekend we’re phone-banking.

If you are voting absentee, make sure you hand deliver your ballot to the municipal drop box rather than relying on USPS to get it there on time. If you are planning to vote in person, give yourself plenty of time and make sure you are dressed warmly and have a durable mask.

As tempting as prayer might be, my own focus is on what people can do. This year that might include contingency plans for what happens if election results end up in a legal black hole of state and federal courts. Americans committed to a democratic process need to prepare to engage in widespread civic action; not just marching and protesting, but perhaps even a nationwide sit-down action akin to a general strike.

I hope it does not come to that. I’d much prefer to celebrate the election outcome with a serious drink or two. Until then we better be prepared for just about anything. That’s not emotional instability. It’s rational analysis.

This article has 3 comments